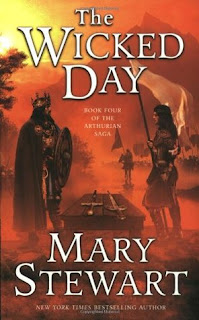 The life of Mordred (King Arthur’s son by his half-sister) is the main focus of this last book in MaryStewart’s Arthurian series.
King Arthur’s legendary reign weakens as does Merlin’s power. Unlike in other versions of the Arthurian legend, Mordred is quite a likable character here, and we get to know him from early childhood. I wanted all to work out well for Mordred just as much as I wanted Arthur and the kingdom to enter a new age with hope.
This book considers, through story, if we can change our fate or if we simply must do what is ordained by powers beyond the mortal realm. The characters are challenged to have hope and patience beyond their lifespans, to believe that, ultimately, the goal of difficult and even evil days can be to produce a greater, future good.
While I was content to end the series with book three at the height of the Arthurian kingdom, this last book was more than just an encore after the series should have ended. The story-telling was just as compelling as in the rest of the books.
Sigh. I've reached the end of the entire tale . . . again. It was time, but, still. Sigh.
Posted by Unknown at 11:56 AM