It is the summer of 1961 and Frank Drum, the middle of three children, is 13 years old.  The family lives in New Bremen, Minnesota and five deaths happen over the summer, some of which change Frank and his family forever.

The book is beautifully written and is told from the perspective of Frank 40 years later.  It is ultimately a book of hope, family and love.  Perfect for the season.
Posted by Mary Beth at 9:22 AM No comments: 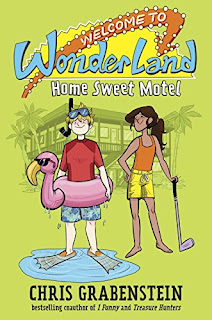 P.T. Wilkie loves to tell stories and he uses that strategy when he learns that the Wonderland Motel needs to earn $100,000 by the end of the month or the doors will be closed forever. P.T. teams up with his friend Gloria to come up with ideas to draw in customers. P.T.’s first idea is Croaky Karaoke with the pool’s giant frog slide. Their next idea is a pirate treasure hunt, which works great until they get in trouble with local businesses. P.T. learns that there may be hidden jewels somewhere, however they are two criminals who are also looking for them. Can P.T. and Gloria save the Wonderland Motel?
Posted by Unknown at 1:56 PM No comments: 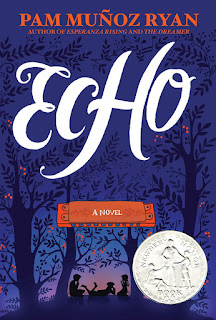 Echo is a book with several parts. The beginning and ending revolve around Otto, a boy who gets lost in a forbidden forest, who meets three mysterious sisters. He becomes entwined with a prophecy, a promise, and a harmonica.

Several years later, Friedrich who lives in Germany during Hitler’s reign finds a special harmonica that does not sound like anything he has ever heard. Friedrich must rescue his father from a work camp when he talks out against Hitler. The harmonica finds its way to Pennsylvania and into the hands of Mike. Mike and his brother are being adopted, but the woman who is adopting them does not want boys, especially two.  When Mike learns of a harmonica group of kids that travels the country, he decides to try out in order to protect his brother. He makes a deal with their new mother, if he makes the traveling harmonica group, she will let his brother stay with her. The harmonica then finds its way to Ivy in California. Ivy’s brother has enlisted in the Army when the Japanese bombs Pearl Harbor. It becomes Ivy’s job to keep their family together.

The lives of Friedrich, Mike, and Ivy converge in a way that would someone would deem as fate.
Posted by Unknown at 12:20 PM No comments: 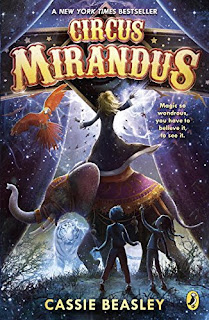 Micah and fellow classmate, Jenny Mendoza, search for Circus Mirandus. They meet the Lightbender and they see his powers first-hand. During the meetings with the Lightbender, Micah learns some truths about his family. He also learns what miracle Grandpa Ephraim really asked for.

This was read by Bronson Pinchot.
Posted by Unknown at 12:20 PM No comments: 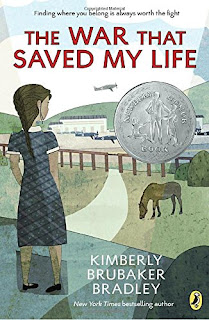 Ada has never left her one-room apartment in her nine years of life. Her mother keeps Ada inside because Ada was born with a clubfoot. But when her brother starts venturing outside the house, Ada teaches herself to walk. When humors of Hitler bombing London, Ada escapes with Jamie, her brother, to the country.

This was a totally delightful story of Cather & Wren, identical twins in Nebraska.  They have always done everything together but as they go off to college and University of Nebraska - Lincoln, extrovert Wren wants a different roommate and a life away from her sister. Introvert Cath is devastated. Both sisters have challenges their first year of college.

A big part of this story involves Cath and her FanFiction blog related to a very Harry Potteresque character.

Families, love and growing up are all themes in this fun book.
Posted by Mary Beth at 9:57 AM No comments:

Harry Potter and the Order of the Phoenix by J.K. Rowling, 870 pages

Harry Potter and the Order of the Phoenix is book 5 in the wildly popular seven book series by J.K. Rowling.

In this volume Harry is a full-blown 15 year old teenager with an attitude.  The Ministry of Magic is trying to discredit him because they don't want to face that Lord Voldemort is back.  It seems to Harry that Professor Dumbledore cannot be bothered to talk to him, let alone look at him this year.  And to top it all off the new Defense Against the Dark Arts teacher, Dolores Umbridge, is a Ministry plant who is determined to keep the Hogwarts students from learning any defensive magic.

Not a happy time for our hero, Harry.  However, it is a rollicking good time for those of us lucky enough to read or listen to the story.
Posted by Mary Beth at 9:57 AM No comments:

The Rocks by Peter Nichols, 432 pages

This is a book club book I am not looking forward to discussing.  The setting is beautiful: Mallorca, an idyllic island off of Spain.  The people who inhabit the story are less so.

The characters weren't all that likable and some of them were downright despicable.  Meh.
Posted by Mary Beth at 4:29 PM No comments:

Four Seasons in Rome: On Twins, Insomnia and the Biggest Funeral in the History of the World by Anthony Doerr, 290 pages

Before author Anthony Doerr won the Pulitzer Prize for his novel "All the Light We Cannot See" he won the Rome Prize from the American Academy of Arts and Letters.

The prize comes with a stipend, an apartment and a writing studio in Rome for a year.  He learned of the award the day after his wife had twin boys.  These new parents packed up the boys when they were six months old and headed to Rome.

Doerr had a novel ruminating in his brain that he thought he would work on during the year.  That novel eventually became "All the Light We Cannot See" but he didn't do much writing on it during the year he spent in Rome.

I listened to this book, read by the author, and it was such a wonderful peek into this brilliant writer's mind.  He knows his words, this one.   It was also a wonderful look at Rome and Italy and life in general.
Posted by Mary Beth at 2:33 PM No comments: