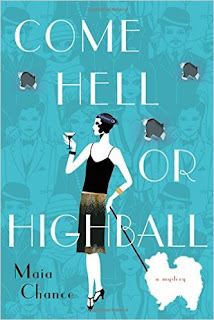 Poor Lola!  Lola, Lola, Lola! Lola is a high society matron in 1923 and her cheating lowlife of a husband dies of a heart attack but leaves her penniless!  How dare he!  Lola has only managed to survive the marriage by having alcohol, chocolate and mystery novels.  (My kind of woman!) Now what is to become of her?

Lola manages to soldier on by partnering with her sturdy and worldly Swedish cook, Berta, and agrees to find a certain reel of movie film for one of her husband's former mistresses.  What happens next is a hilarious key-stone cop type of adventure!  Berta falls for a gangster, Lola has someone trying to kill her, causing her to hang by her girdle from a gargoyle, and finds herself attracted to the P. I. who is following her.

I loved this book because rather than being a dark, psychological thriller, it was a funny, charming mystery.  It made me laugh out loud!  Just like Janet Evanovich!

Posted by Unknown at 7:36 AM No comments: 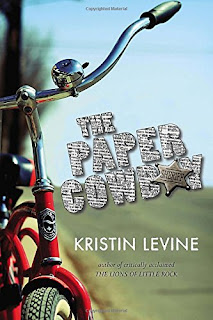 Twelve-year-old Tommy wants to be a cowboy, but what he really is, is a bully. Tommy starts acting out by making fun of other kids and stealing from the store. He does have a reason - things at home are not good for Tommy. His mom has been having mood swings ever since she gave birth to his little sister and when his older sister, Mary Lou, gets badly burned, things become worst.

Tommy feels bad for what happened to Mary Lou, since she was doing one of his chores. To help make amends, Tommy takes over Mary Lou’s paper route. Tommy is also trying to investigate his neighbors after finding a copy of The Daily Worker, a communist newspaper.

When Tommy is caught stealing from Mr. McKenzie’s store, he learns that he has to help at the store ever Saturday morning until his debt is paid off. Tommy is not happy about this and frames Mr. McKenzie as a communist by placing The Daily Worker on his counter. Things are starting to spiral out of control.

This is a preliminary nominee for the Mark Twain Award.
Posted by Unknown at 7:11 PM No comments: 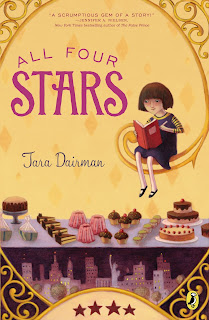 Gladys Gatsby has been cooking since she was seven, unbeknownst to her parents. After a crème brûlée accident, where the kitchen curtains catch on fire, Gladys’s parents finally learns her secret. Gladys loses her kitchen privileges and her allowance for 6 months to help pay for the damage – her parents just want Gladys to be a kid and to do kid things.

When Gladys is assigned to write a paper about her future job, she first writes about how she wants to be a vet. However, her teacher notices that her paper lacks passion, so she persuades Gladys to rewrite her paper. Gladys needs up winning her classroom’s essay contest and her essay over how she wants to be a food critic gets submitted to the New York Standard newspaper to compete against other essays.

Gladys’s essay gets accidentally passed to the food editor; Gladys gets a job as a freelance writer as a food critic. The only problem is that Gladys must get to New York City without her parents finding out.

This is a nominee for the Mark Twain Award.
Posted by Unknown at 6:30 PM No comments: 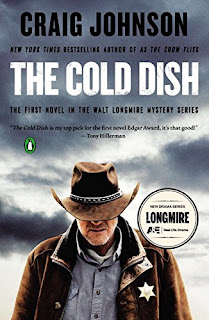 When Cody Pritchard is found dead, almost everyone believes that his death was from a hunting accident. However, Cody was one of four boys, who were convicted of raping Melissa Real Bird, a Cheyenne girl with Fetal Alcohol Syndrome. When another boy comes up dead, it looks as though someone is getting revenge on the fours boys. It is up to Walter Longmire, the sheriff of Absaroka County, Wyoming to find out who is killing the young men, as well as keeping the other two safe.

Characters like Deputy Victoria and Henry Standing Bear had me laughing out loud and I cannot wait to read the next book. This was read by George Guidall.
Posted by Unknown at 4:56 PM No comments:

The Edge of Lost by Kristina McMorris 327 pages 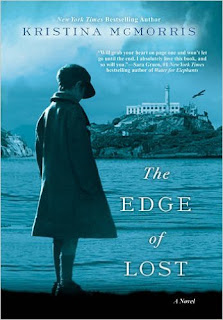 This is a story that begins in Dublin, Ireland, 1919, moves to New York, Leavenworth, Alcatraz Island, and back to Dublin, all so a young Irishman, Shan Keagan, can learn the true meaning of family.  Shanley Keagan was a twelve-year-old orphan, living in the care of his Uncle Will, a drunk on the dole.  Shan, a natural comedian and talented singer, was able to supplement their income by performing in pubs.  But when the dole dries up, Uncle Will decides they should go to America, in search of Shan's real father, an American sailor.  Uncle Will dies just as the ship docks at Ellis Island and Shan must rely on the kindness of strangers to survive in the United States.  He becomes a part of the Capello family and in a series of strange improbable events, Shan aka "Tommy" ends up in Alcatraz, the prison from which no one escapes! But Shan does indeed escape, and not alone!  No more spoilers......if you want to know the rest of the story, you will just have to read and enjoy!
Posted by Unknown at 4:25 PM No comments:

Who Do You Love by Jennifer Weiner, 400 pages

Rachel and Andy were 8 years old when they met for the first time.  They ran into each other again when they were 16, recognized each other and reconnected 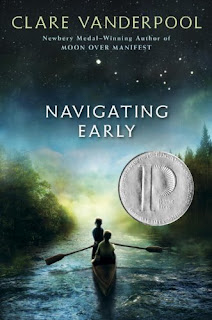 Jack Baker is uprooted from his Kansas home to a boarding school in Maine after the death of his mother, while his father is in the Navy. While at school, Jack meets a boy named Early Auden. Early, a strange boy who is obsessed with the number pi. Early believes that he can read the number pi as a story about the Great Appalachian Bear.

When Jack is left at school during break, he and Early find themselves on an adventure following the story of Pi on the Appalachian Trail. Along the way, they meet many people, whom Early weaves into the pi story.

This story is a great story of friendship and accepting others, though they are different from you. This book is written in two parts, the story of Jack and Early and the story of Pi.

This was read by Robbie Daymond, Mark Bramhall.
Posted by Unknown at 9:56 AM No comments:

The Island of Dr. Libris by Chris Grabenstein 256 pages 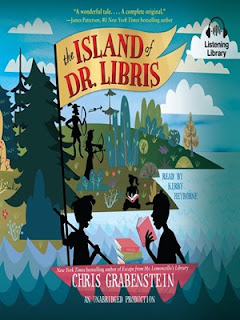 Have you ever wanted your favorite book characters to come to life? Well, when Billy and his mother stay at the cabin of Dr. Libris, that is just what happens. Besides the cabin, Dr. Libris also owns an island that is magical. Whenever Billy opens a book, he hears sounds coming from the island. Some of the characters include Tom Sawyer and Robin Hood. Billy has to discover how the books are coming to life.

Chris Grabenstein writes another great book that incorporates classic literature in a unique way. It opens children to stories that they may not have heard about. This was read by Kirby Heyborne.
Posted by Unknown at 9:48 AM No comments:

The Land of Stories: The Wishing Spell by Chris Colfer 464 pages 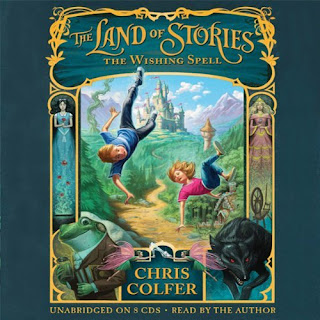 Another great twisted fairy tale. After Alex and Conner’ father dies, the twins receive a book of fairy tales on their birthday that their father used to read to them. When the book comes to life, Alex and Conner seem to find themselves falling into the Land of Stories. The twins follow a mysterious journal that instructs them to find eight items from various people throughout the kingdom, to complete the Wishing Spell so that they can get home.

This was read by Chris Colfer.
Posted by Unknown at 9:47 AM No comments:

The Girl Who Disappeared Twice, The Line Between Here and Gone, The Stranger you Know by Andrea Kane (Forensic Instincts Series) 1123 pages (3 books)

I decided to blog about the 1st three books in this series all together.  This is a great murder mystery series full of interesting and diverse characters. Casey is the owner of Forensic Instincts, a group of investigators who work inside and, when necessary, outside the law.  Casey is a behavior analyst, Marc is a former Navy SEAL and FBI agent, Hero is a human scent evidence bloodhound, Patrick is a retired by the book FBI agent, Ryan is a super tech guy, Clair is a claircognizant, and let's not forget Hutch, Casey's hot FBI boyfriend who is always there when she needs him. Between them they have all the tools to solve cold cases, and hot new ones that come their way.  This series is a real page turner. If you like murder mystery thrillers, read these books!
Posted by Unknown at 7:04 AM No comments: