The "Alphabet Sisters" is the story of three estranged sisters and their grandmother who finagles them back in the same room again by demanding they attend her 80th birthday party.

This book was okay but I would have been happier if it ended 100 pages earlier than it did. 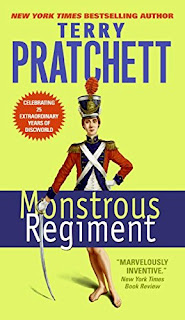 If you've ever read any Pratchett, I don't need to tell you that you'll enjoy this book.  With his usual wit and vivid writing, he tells the story of Polly.  Polly is a young woman who lives in a war torn country.  Not many people are left to join the army, Polly's brother joined up some time ago and has never returned.  Many of the men who do return, don't come back whole.  It's a real mess and Polly is very worried about her brother.  There's nothing for it but to pretend to be a man and join the army herself.  Remarkably, there's a whole set of new recruits lining up the day she goes to sign up.  It becomes less surprising how there were so many young "men" still around to join pretty soon, though.  If you liked Mulan, you'll love this!  Pratchett does an excellent job of writing female characters with depth and range, too.  It's so refreshing!
Posted by Wildhag at 12:51 PM No comments:

And Then There Were None by Agatha Christie 194 pages 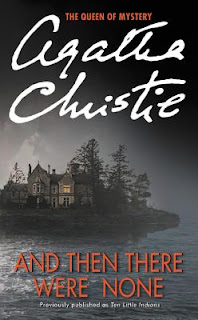 This Agatha Christie title is quite unusual.  For one thing, there is no detective.  It was a one-off.  A group of people are invited to an island for a weekend under different pretexts.  They don't know one another, or their hosts, for that matter.  Upon arrival, they find that their hosts are mysteriously absent, with a message mentioning a delay.  After dinner, a record is placed upon a gramophone, the voice booming out a list of charges against everyone in attendance.  Every one of them in the group is accused of murder in one form or another.  Then a dangerous game begins as one after another is mysteriously killed.  At first, it is suspected to be an accident or suicide, but soon enough, they realize they are sharing the island with a ruthless killer, bent on meting out a sort of revenge or justice against them all.  This book ends significantly differently from the movie and in many ways is more satisfying for it.  It is amazing how many other movies and books have used this set up.  I highly recommend it.  I listened to it on audio read by Hugh Fraser, who always does such a great job with Christie titles.
Posted by Wildhag at 12:24 PM No comments:

Evil Under the Sun by Agatha Christie 220 pages 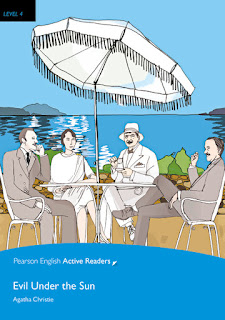 I listened to this classic read by the ever exceptional David Suchet.  Poirot is staying on an island for holiday.  Of course a range of characters abound, dropping hints and suggestions all along.  In this story, the lovely victim is envied by many, reviled by more and there is no shortage to suspects.  Rest assured, the incomparable Hercule Poirot will be able to sort it out, using only his little grey cells.
Posted by Wildhag at 12:14 PM No comments: 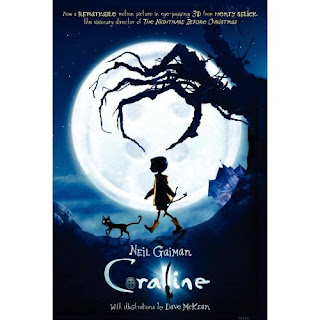 In preparation for a cosplay of Other Mother, I listened to Coraline read by Neil Gaiman.  What a treat!  Coraline is an average girl, she enjoys wandering around outside and watching nature, she likes exploring inside, too.  In her new home, she finds a door that covers a brick wall, but is always locked.  Not one to leave a mystery unchecked...and hearing mysterious noises from beyond the door, she steals the key and opens the door.  The brick wall is gone, replaced by a hallway, incredibly old and pulsing with magic.  This hall leads to her "other" home, with her other mother, and other father and other neighbors and other resident animals.  Nothing is quite the same, some is quite distressing and all Coraline wants is to return to her real mother and father.  Other Mother won't hear of such nonsense and punishes Coraline.  In her temporary prison, she discovers ghosts of other children.  Coraline is determined to not only return home, but to rescue the ghost children and her parents all at once.  I highly recommend this story. It's just creepy enough and I love listening to Neil Gaiman read his own stuff.  By the way, the cosplay turned out great!
Posted by Wildhag at 12:06 PM No comments:

The Fix by David Baldacci, 432 pages

"The Fix" is book #3 in Baldacci's Amos Decker series.  Amos and his FBI crew are back.  This time, instead of working on a cold case, they work to solve a murder that happened right in front of Amos.  The team ends up in an uneasy alliance with an agent from the Defense Intelligence Agency as they all work together to solve the crime, or do they?

I enjoyed listening to this book.  It was a thriller that kept me entertained throughout.
Posted by Mary Beth at 7:17 AM No comments:

Camino Island is off the Florida coast and home to a charismatic book store owner who may also deal in stolen rare books a bit on the side.

This is a slight departure for John Grisham in that this is not a legal thriller, though it is still a thriller.

This is a great summer read.  It's pretty light, has a story that clips along and there is an ending the wraps up the story nicely.  Not Grisham's most thrilling, but it is fun.
Posted by Mary Beth at 8:36 AM No comments: