John Grisham's latest tells the story of three students in their last semester at law school.  They are at a for-profit school that is not preparing them for the difficult bar exam and are deeply in debt.  A fellow law student and friend starts them on the trail of possible fraud related to the school.

They drop out, begin practicing law without licenses and run into big problems. The protagonists are not very sympathetic, though that didn't stop me from enjoying the book.

There is an interesting subplot involving illegal immigrants and that plays well with the story and gave the characters an opportunity to not be jerks.  Bottom line: I enjoyed it.
Posted by Mary Beth at 2:10 PM No comments:

Killers of the Flower Moon: The Osage Murders and the Birth of the FBI by David Grann, 320 pages

In the 1920's the Osage Indians of Oklahoma were quite wealthy.  Their land was oil-rich and they owned the mineral rights.  All was not rosy however.  Dozens of Osage Indians were murdered and somehow those cases couldn't be solved locally.

Finally, the Bureau of Investigation stepped in and found out who was behind at least some of the murders.  The why was easy - greed.

In the first part of the book, author David Grann explores the story of one of the families whose members were murdered.   The second part details the investigation into the murders by the Bureau of Investigation, which became the Federal Bureau of Investigation.  The third part details the authors own investigation into this story, the additional information he found and the closure he was able to provide to some of the families whose relatives were murdered.
Posted by Mary Beth at 1:48 PM No comments:

Harry Potter and the Chamber of Secrets by J.K. Rowling 259 pages 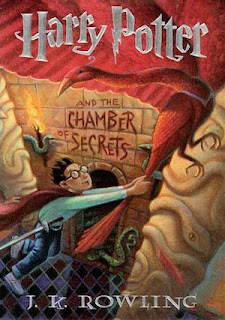 This, the second book in the series, begins to let the reader in on some of Lord Voldemort's history.  Harry returns to Hogwarts in spite of warnings from a mysterious visitor, who claims that danger awaits him.  The alternative is staying with his horrible aunt and uncle, so Harry ignores the warnings.  New professors, new students and new dangers do indeed await the students at Hogwarts.  The Chamber of Secrets, rumored to hold an unspeakable monster, is opened by an unknown person and attacks begin occurring in the halls of Hogwarts.  Harry is suspected of being in league with the monster or responsible for the attacks and he will have to rely on his friends and his wits to solve the mystery, clear his name and hopefully (ha) survive to be the hero once again.  Read by Jim Dale.
Posted by Wildhag at 10:56 AM No comments:

Harry Potter and the Sorcerer's Stone by J.K. Rowling 309 pages 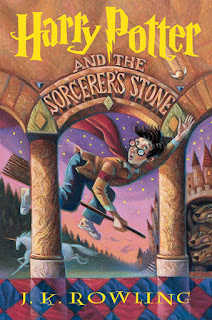 It was time to revisit the Potter-verse.  I always have so much fun going back and listening to these books.  I get new connections to the later books every time.

Harry discovers he's a wizard after living with his non-magical aunt and uncle who treated him quite unkindly for about 10 years.  He's accepted at Hogwarts, a school that educates and trains young witches and wizards, but he begins to suspect all is not well.  This is the first book in the Harry Potter series and is a very fun and engaging start to one of my most beloved series of all time.  I am listening to the whole series on audio read by Jim Dale, who is one of my favorite readers.
Posted by Wildhag at 10:50 AM No comments:

The Passenger by Lisa Lutz, 294 pages

The book begins with Tanya Dubois on the run because her husband has just died and she can't afford to be around if any difficult questions are asked.

Through this fast paced story, the true story of Tanya Dubois is revealed, along with the reasons why she ran (it turns out) for the second time.

This is one of the fast, suspenseful books best read in one quick sitting so you don't think too much about the story.  It was a fun, suspenseful romp, with plenty of twists and turns.
Posted by Mary Beth at 8:15 AM No comments:

The Subtle Art of Not Giving a F*ck by Mark Manson, 224 pages

This little book doesn't advocate not caring about anything.  It advocates that we should pick and choose what we care about instead of being emotionally invested in every darned thing.

There's much more in the book - not all of us are special, happiness is hard work, etc.  It was a nice rah rah book.  I think if I was in my 30s and not my 50s it would have been more life changing.  Mostly, I said "yep" as I listened.  Definitely worth the time it took to listen to it.
Posted by Mary Beth at 7:21 AM No comments: