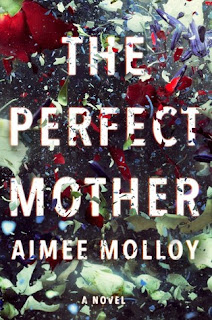 This was a very fast paced, suspenseful read. I found a lot of the main characters extremely irritating, but it was a great read and I didn't see the ending coming at all, which is always a plus! This also was a good read for me, because there were a lot of stigmas that society puts on new mothers, such as shaming them for formula feeding as opposed to breastfeeding, the lack of maternity leave in the US, etc.

The May Mothers are a group of mom's who all gave birth in the month of May. They meet a couple times a week to discuss the anxiety, fears, and happiness that come with being a new mom, all in the refuge of women who completely understand. One of the mom's suggests they meet at a bar on July 4th, insisting on a much needed, baby-free night for all the mother's. Things are going great, until they discover that one of the babies has gone missing from his crib. Everyone's lives are flipped upside down, especially the oddly-reserved Winnie, who's son Midas was the one who was taken. Secrets are revealed and a few of the mother's are forced to deal with things they had hoped would stay hidden in the past, all in hopes that Baby Midas will be found safe.

Posted by Kelsey Weber at 5:31 PM No comments:

The Wife Between Us by Greer Hendricks and Sarah Pekkanen, 346 pages 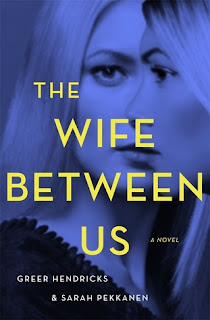 This was a fast paced, twisty thriller, that I really enjoyed! I've tried to type up a brief recap multiple times, but there are so many twists and turns in this book that I'm worried I'm going to give away something I shouldn't. All I will say is, anything you assume you have figured out is probably wrong. READ THIS BOOK!
Posted by Kelsey Weber at 2:34 PM No comments: 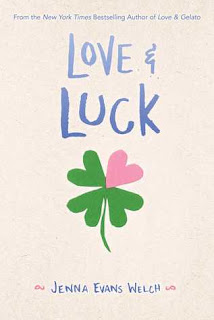 I always enjoy armchair traveling...especially to a country that I can't wait to re-visit (it's probably changed a little since I was there 14 years ago). I also have a soft spot for Ireland because I'm 18.5% Irish. Addie is visiting Ireland for her aunt's destination wedding (wish I had a relative that would get married in a foreign country and pay for my travels). She's also trying to get over a broken heart. The boy behind her broken heart caused a riff between her and her favorite brother, Ian. They're supposed to go Italy to visit Addie's best friend who recently moved there but her brother makes his own plans. Addie can't let her brother out of her sight (due to a punishment given by her mother) so she's forced to tag along on her brother's secret road trip across Ireland while trying to convince her mom they're both in Italy. Besides the amazing descriptions of the Irish countryside and road trip antics you keep reading because Addie and her brother both hint at there's more to her break up than she's admitted.
Posted by Jenny E. at 10:47 AM No comments:

The Witch Doesn't Burn in This One by Amanda Lovelace, 208 pages 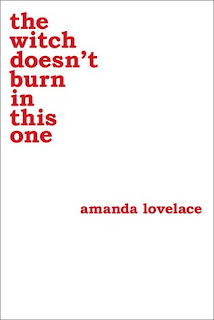 I was anxious to read this because I really enjoyed Lovelace's other book, "The Princess Saves Herself in This One". I didn't love this one as much as that one, unfortunately. I didn't find the poetry in this collection as relateable to my personal life, but still found it beautiful, nonetheless! I definitely recommend anyone who is new to poetry to pick up something by Amanda Lovelace.
Posted by Kelsey Weber at 5:33 PM No comments: 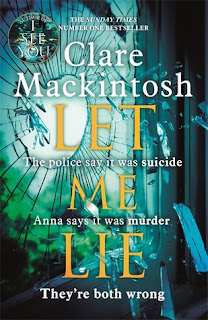 I really enjoyed this book. I attempted to read something by Mackintosh a while back, and only got a few chapters in before I gave up due to boredom. I was nervous that this would be a similar situation, but I couldn't put this one down!

It has been one year since Anna's mother and father both committed suicide. She was completely blindsided, which has made coping with the incident even harder. Now attempting to move on with her life, Anna has a new baby and a seemingly perfect relationship with the baby's father. Her world is once again rocked, when a note arrives at her home, making her question the circumstances surrounding her parent's deaths. What she doesn't realize is, trying to get to the bottom of this puzzle is going to put everyone around her, including herself, in danger.

Posted by Kelsey Weber at 5:29 PM No comments:

The Peculiar Incident on Shady Street by Lindsay Currie 295 pages 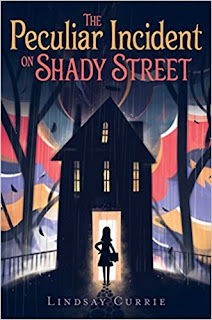 This is a great story to hand to a kid who likes mysteries, especially with some spookiness, and 'new kid' books.  Tessa has had to move from sunny Florida to very grey Chicago.  She wants to be happy for her parents, whose talents garnered them awesome new opportunities, but she's having trouble adjusting to a new environment, trying to make friends, and - oh, yeah - she's pretty sure her new house is haunted.  This is a fun little mystery with just enough spooky for a young audience.
Posted by Wildhag at 5:47 PM No comments:

Where There's a Will: a Nero Wolfe Mystery by Rex Stout 258 pages 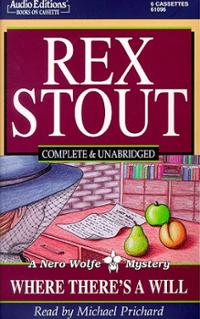 I love revisiting these books.  This one is not just an intriguing mystery, but a fun character study, too.
When strong, influential sisters, April, May and June call on Wolfe, he prepares himself for the worst.  After all, he does not play well with women.  Their main complaint is that their bother's will is bizarre.  He left his sisters a piece of fruit each, an oddly small amount to his wife and a whopping $700,000 to his mistress.  Something sure doesn't seem right in all of it.  The sisters don't care about money, they all have plenty of their own.  However, there were some legacies that were promised and it seems unlikely that their brother would have completely ignored them.  This was a tricky one that even got Wolfe not only out of his chair, but out of the house!  Read by Michael Prichard, it was a treat as always.
Posted by Wildhag at 5:37 PM No comments:

Over My Dead Body by Rex Stout 293 pages 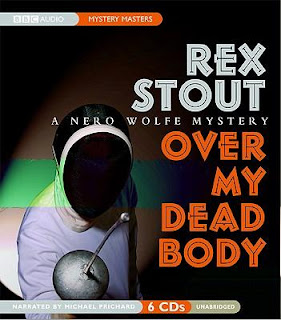 When a Balkan beauty gets in trouble over some missing diamonds, to whom can she turn but the world-famous Nero Wolfe?  Especially since she claims to be Wolfe's long lost daughter!  The stakes are suddenly raised when a student at this woman's fencing school ends up dead after a 'pointed' lesson.  As Wolfe and his sidekick, Archie, thrust and parry into a tangle of documents, identities and international intrigue, another student body turns up, expertly skewered through the heart.  Is Wolfe's long lost daughter the black sheep of the family, a hot-blooded mistress of murder? This is gumshoe detective fun at its best and well worth listening to again.
Another fantastic Nero Wolfe mystery read by Michael Prichard, but I've yet to meet one I didn't love!
Posted by Wildhag at 5:28 PM No comments:

I'll Be Gone in the Dark: One Woman's Obsessive Search for the Golden State Killer by Michelle McNamara, 352 Pages 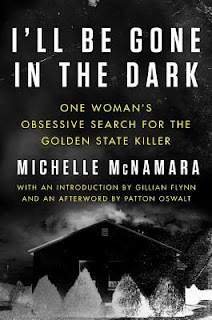 I. Loved. This. Book. I will loudly and proudly admit that I am not fond of non-fiction. I love a good, juicy biography, but overall, I struggle with the genre. This book had so much buzz around it, and I read about it in a Library Journal at work, so I thought I would give it a try. This book sucked me in from page one and was one of those "Do Not Read After Dark" kind of books. Michelle McNamara was an extremely talented and intelligent woman, who devoted most of her life trying to figure out the details of these horrific crimes. I'm extremely saddened that she passed away before she was able to complete the book and see the impact it had on the investigation. I've been recommending this one to everyone I know, and will continue to do so for the unforeseeable future.
Posted by Kelsey Weber at 5:23 PM No comments: 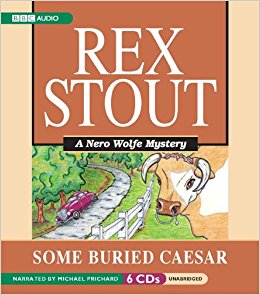 It is a well established fact that Nero Wolfe seldom leaves his house, and almost never for work.  So when a murder occurs while he and Archie Goodwin are visiting a fair, he's aggravated, to say the least.  If he wants to get back home to his favorite chair, he'll just have to solve the murder.  As always, the characters of Nero and Archie are vivid and fun.  This installment of the series is also the introduction of Lily Rowen, who gives Archie an opportunity to show just how witty he can be.  I listened to this read by Michael Prichard, who captures Archie's voice to perfection.
Posted by Wildhag at 5:22 PM No comments: 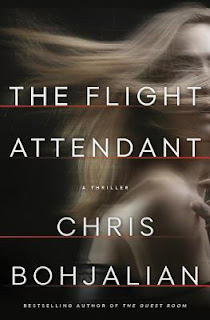 The Flight Attendant was a new release that I had been anxiously waiting to read. I enjoyed it, but didn't love it. I found the main character EXTREMELY unlikeable. I almost gave up on the book due to how much I disliked her, honestly. But I'm glad I stuck it out until the end, because WOW, I didn't see that coming!

Flight Attendant Cassandra Bowden is a hot mess. Very rarely is she not drunk, and usually makes terrible life choices during her drunken moments. One of those mistakes: meeting a passenger on one of her flights, and waking up, extremely hungover in his hotel room the next morning. The only thing that makes this mistake a tad different than her "usual"? When she wakes up next to the man, she finds him brutally murdered. Cassie panics and flees the scene, afraid to call the police because she is alone in a foreign country. She realizes she did the wrong thing by fleeing, and attempts to cover it up by lying. One lie after another, Cassie takes the situation from bad to worse. She is questioning everyone-even herself. Did she kill this man? And if she didn't, who did?
Posted by Kelsey Weber at 12:53 PM No comments:

Harry Potter and the Cursed Child by John Tiffany, 434 Pages 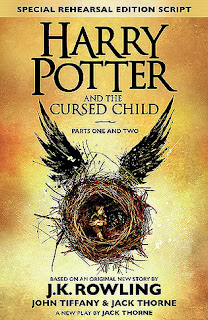 I'm going to start off by mentioning that I just jumped on the Harry Potter bandwagon this year. (I know, I KNOW!!!) I was SERIOUSLY missing out, and read the entire series in about a month, loving every minute of it. I was hesitant to read this one because 1. It's not by J. K. Rowling, and 2. Basically everyone I know told me it was horrible. I finally gave it a try because I was missing Harry Potter so much, and I'm honestly glad I did. I really enjoyed reading about the original characters in their adult years, and it brought back the same feelings that the series gave me.
Posted by Kelsey Weber at 6:08 PM No comments: